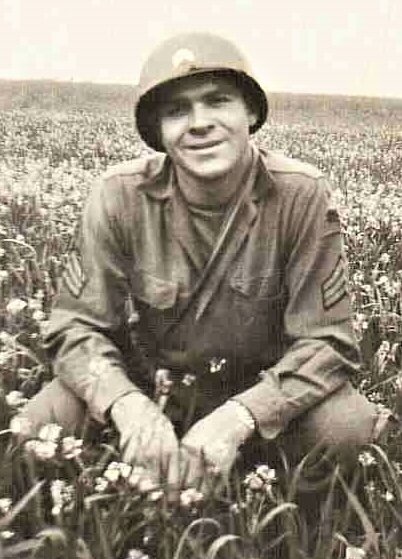 John F. Marshall, 101, of Lincoln Park, NJ, passed into eternal life on June 3, 2022.  Born in 1920 in New York City, he moved to Lincoln Park as a small child and from an early age became one of the Borough’s most prominent citizens, working before and after school at the butcher shop on Main Street. He joined the Lincoln Park Fire Department in 1938 and remained active throughout his life as a volunteer fireman and later as an officer of the Exempt Association.

After graduating from Boonton High School, he worked for Curtiss Wright before serving as a Staff Sergeant and Tank Commander in the US Army in World War II.  Assigned to the 707th Tank Battalion, he saw heavy combat in the European Theater of Operations, including the Battle of the Hurtgen Forest and the Battle of the Bulge.  He was wounded in combat and received the Military Order of the Purple Heart and is a Chevalier of the Legion of Honor of France, as well as many other awards for his service. His combat experiences were featured in the television series “Greatest Tank Battles” and are recounted in his published memoir “A Fighter Tanker’s Story”.  Upon returning to Lincoln Park, he joined American Legion Post 279 and became a Life Member.

After the war, he met his one true love, Daisy, and they married in February 1947. Together, they opened and operated Marshall’s Packaged Goods on Main Street for over two decades, as well as a number of other small businesses.  Known for his hard work and honesty, “Johnnie” was a key figure in the business community and helped to establish the present site of the Lincoln Park Post Office and to bring utilities to unserved parts of town.

John and Daisy raised three children: John, Dennis, and Diane.  In 1962, they moved to their current home on the Lincoln Park-Kinnelon border. Inseparable throughout their nearly 68 years of marriage, they remained active in the communitywell into their 90s, participating in the Lincoln Park Senior Citizens Club in addition to Legion and LPFD activities.

A gifted and engaging storyteller, John could describe World War II and growing up in the 20s and 30s with clarity and often self-deprecating wit.  He particularly relished stories in which he got the best of a situation through his considerable resourcefulness, tenacity, and fierce convictions.  He enjoyed nothing more than “batting the breeze” when friends and neighbors would visit and spending time outside on a sunny day.

He was predeceased by his wife, Daisy, in 2015 and by a son, John A. Marshall, in 2020.  He is survived by his daughter Diane Marshall Ennist and son Dennis Marshall, six grandchildren, John P., Erin, Nathan, Claire, Christine, and Allyson, and four great-grandchildren.  Family and friends may visit at Keri Memorial Home, Lincoln Park, on Wednesday, June 8 from 3pm-7pm.  A funeral mass will be held at Holy Spirit Roman Catholic Church, Pequannock, on Thursday, June 9 at 10:30am.  He will be buried alongside his beloved Daisy at Arlington National Cemetery.

In lieu of flowers, the family would sincerely appreciate a short letter or story about a special memory you may have shared with John Marshall that will be compiled in a remembrance book. Donations to the Lincoln Park Fire Department or other local causes in his memory would be appreciated.