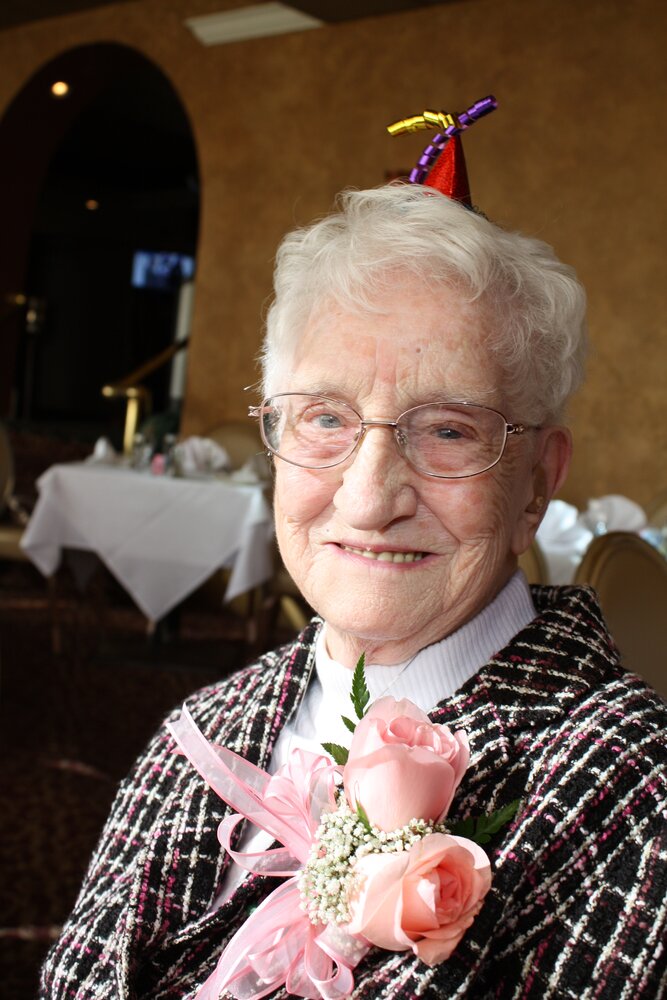 Please share a memory of Dorothy to include in a keepsake book for family and friends.
View Tribute Book

Dorothy L. Giotis , 96 of Wayne, New Jersey passed away peacefully at home on Monday, May 30, 2022. She was born in New Castle, Pennsylvania to her parents, Oscar and Florence. She was the third of four children, all predeceased her. Beatrice Seaton (1950), Ruth Robb (2012) and Margaret Mostrando (2011). Born two months premature weighing only two pounds, she was so tiny she was placed in a shoe box by the fireplace to keep her warm. She and her sister Ruth were true Irish twins as they were both born in 1925, only nine months apart. She worked at Shenango China in New Castle, Pennsylvania before moving to Paterson, New Jersey, where she met and married her husband, Gabriel.

In 1972 the family moved to Wayne, New Jersey, where she resided for the last fifty years. She worked at Mack Wayne Plastics and retired in 1984. Dorothy was an excellent cook, and her spaghetti sauce and meatballs will surely be missed, as well as her homemade french fries. She loved to crochet and made countless afghans, sweaters, blankets, and ponchos for all her family and friends. They are treasured for both their beauty and the love she handcrafted into each piece. She had an eye for perfection and if she spotted a mistake, she would rip it apart and correct it, rather than give it to someone with an error. Of course, no one would have noticed the imperfection. This lifelong hobby began with her desire to help the soldiers in the war by knitting them warm socks to wear. She would always have her yarn and books on her lap. Countless hours were spent making new designs and patterns, and there wasn’t anything that she couldn’t figure out. Bingo was another one of her hobbies she enjoyed. She was able to attend games weekly well into her eighties. She was also a member of the Golden Age Circle of Wayne. She enjoyed watching the Game Show Network, I Love Lucy and her Shirley Temple movies.  She could always be seen with a cup of coffee in her hand, no matter what time of day.

Her greatest love was her family. She was filled with pride and always had a wallet filled with pictures to prove it. Sunday was family day. A big meal was prepared, and her children and grandchildren would spend hours talking, laughing, and spending time together. She always enjoyed trips to Disney World with her family.

Her husband preceded her in death in August 2020. She is survived by her children, her daughter, Ruth Swanson, her son James Giotis and his wife Nancy, and her daughter, Diane Karback and her husband, John. Five grandchildren, Stephanie and Meredith Karback, Demetrios, Nicolas and Athena Giotis. As well as many beloved nieces and nephews.

Due to current family COVID circumstances, a memorial will be planned for a later date. In lieu of flowers, donations to a charity of your choice would be appreciated.

Share Your Memory of
Dorothy
Upload Your Memory View All Memories
Be the first to upload a memory!
Share A Memory