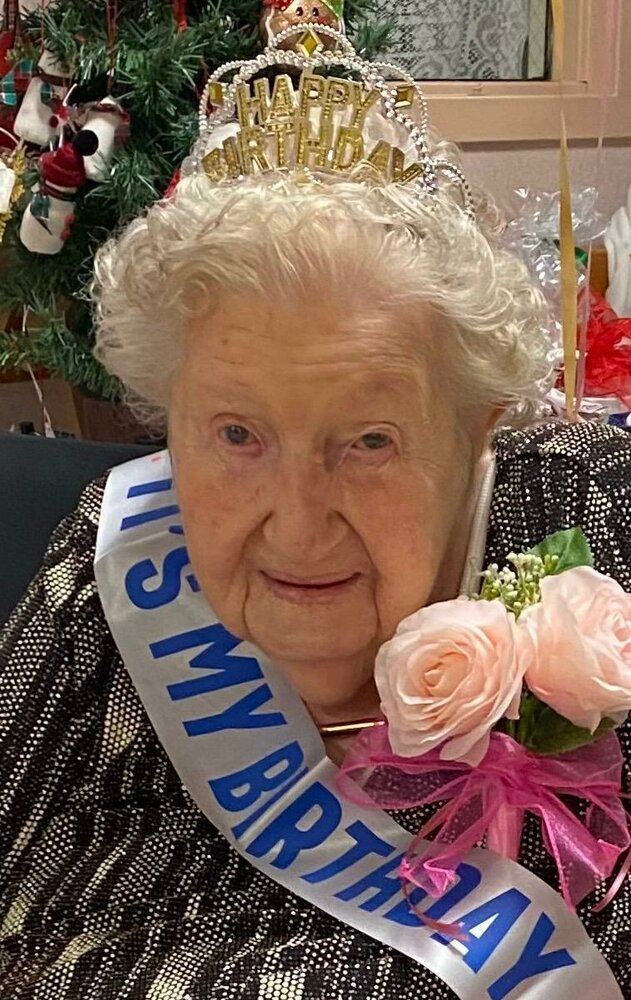 Please share a memory of Ida to include in a keepsake book for family and friends.
View Tribute Book

Ida (Martin) Ward, of Totowa, NJ passed away peacefully on December 22, 2021 at 107 years old. She was born December 2, 1914 to Emil Martin, Jr. And Ida B. (Foeller) Martin. Ida grew up in Brooklyn, New York and graduated from JamaicaHigh School February 2, 1933. She married William Ward on September 23, 1939. Together they raised six children, five of which survive her, Paul Ward (the late Barbara), Mary Anne Foley ( the late John), Joan Damble (Frank), Martin Ward (Jean), and Robert Ward( Merri). She is survived by fourteen Grandchildren and eighteen Great Grandchildren. She is also survived by several nieces and nephews. Ida was predeceased by both her parents, her Step Mother Elenora (Ruppel) Martin, her husband William Ward, her brother Emil Martin, her son Joseph Ward, her Grandson John Patrick Foley, and her Grandson Michael Ward.

Ida enjoyed crocheting and knitting for her family, friends, and even hospital preemie programs for many years. If you had a premature baby in New Jersey, Connecticut, or Florida, odds are your baby went home with a hat or blanket made by Ida. Most of her Grandchildren and Great Grandchildren received crocheted blankets over the years that they cherish. Another hobby of Ida’s was doing puzzles, at least one of which was mounted, framed and is proudly displayed on a grandchild’s wall.

Over the past year, when the assisted living facility she resided at was locked down due to Covid the family would gather on Zoom to visit with her twice a month. They joked she was the oldest Zoomer. Since Ida was very hard of hearing, the family enlisted the help of homemade signs, the chalkboard on zoom, and the help of her caregivers at The Little Sisters to write on a wipe off board what was being said.

A little known fact about Ida was that she was an artist in her younger years. She kept several pieces of her artwork from PS 171 and Richmond Hill High School. Most of the pieces depict drawings of architecture which seems to have been a passion of hers.

For the past 12 years she has been a resident of The Little Sisters of The Poor, St. Joseph’s Home for the Elderly in Totowa, where she had become a local celebrity. Everyone knew and loved Ida. They threw her a 107th birthday party and gave her a crown and sash for the day only a few short weeks ago. Before living there she had lived in Hudson, Florida with her son Joseph for five years after moving from New Jersey where she had resided with her son Robert and his family in the home she and her husband William had originally bought in 1962.

Ida was a woman of faith. That faith is what many attribute to her longevity and resilience of spirit. She will be missed by all that knew her and loved her.

The service will be held privately. She will be interred at Holy Sepulchre Cemetery. In lieu of flowers, a donations to the Little Sisters of the Poor would be appreciated.

Share Your Memory of
Ida
Upload Your Memory View All Memories
Be the first to upload a memory!
Share A Memory