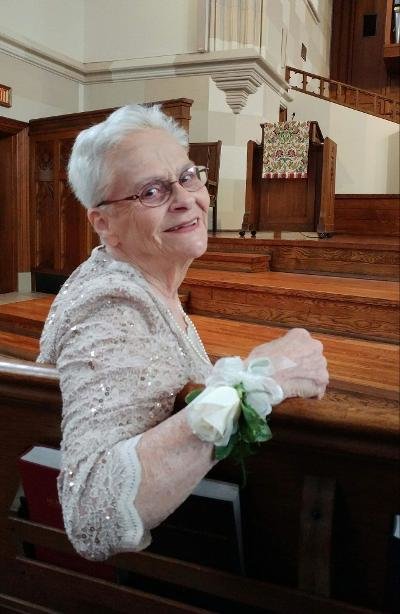 Please share a memory of Judy to include in a keepsake book for family and friends.
View Tribute Book

Judy Ann Coda, 81, of Pompton Lakes, New Jersey passed away on July 13, 2021. Born in Morristown to Michael Griener and Elsa Neff, Judy lived in Chatham and Orange, NJ and England before settling in Pompton Lakes in 1970 with her husband, Richard J. Coda, Jr., who passed away in 2011. Together, they successfully raised six children: Richard M. Coda and wife Michele (nee Puppo) of Scottsdale, AZ; Kathy A. Barnett and husband Rick, of Fort Lee, NJ; Marie T. Hunt and husband Jeffrey of Pompton Plains, NJ; Joseph M. Coda of Highland Lakes, NJ; Suzanne B. Hagen and husband Gerald of Wanaque, NJ; and Judy E. Coda of Wayne, NJ. Judy had a long career of waitressing in many local establishments, including the original Timbers Restaurant in Wayne, Lynn's Sweet Shop, Blockie's, Burgie's, Shopper's Luncheonette and The Pompton Lakes Diner. It was the perfect job for her as she loved to talk to people. Even more than her love of other people was her love of animals, particularly dogs. She fostered over 55 dogs and housed them until they were adopted, including a litter of 3 chihuahuas, of which she kept beloved Penny for herself, and gave Sheldon and Sandie to two of her daughters. Judy, or "Big Jude" as she was affectionately known, was considered a "firecracker" with a zest for life that went unmatched. Many say she was a great friend and dear person, but even more say "I wish I was more like her." She always told it as it was. In addition to her six children, Judy is survived by five grandchildren: Schuyler Hunt of Los Angeles ,CA; Brielle Maffett (nee Hunt) and husband Alex of Glen Allen, VA; Aubrey Hunt of Orange, CA; Lindsay Coda of Sherman Oaks, CA; and Mallory Hagen of Lawrenceville, NJ. They all loved their MiMi, and Judy was especially proud to become a great-grandmother to Brooks Maffett earlier this year. Funeral arrangements are being provided by Keri Memorial Funeral Home, 125 Main Street, Lincoln Park, New Jersey. Visitation will be held on Sunday, July 18, from 2-4pm and 7-9pm, with a funeral service on Monday, July 19 at 10am. Interment will follow at Mount Calvary Cemetery, Butler, NJ. In lieu of flowers, donations can be made to The Gary Sinise Foundation .

Share Your Memory of
Judy
Upload Your Memory View All Memories
Be the first to upload a memory!
Share A Memory