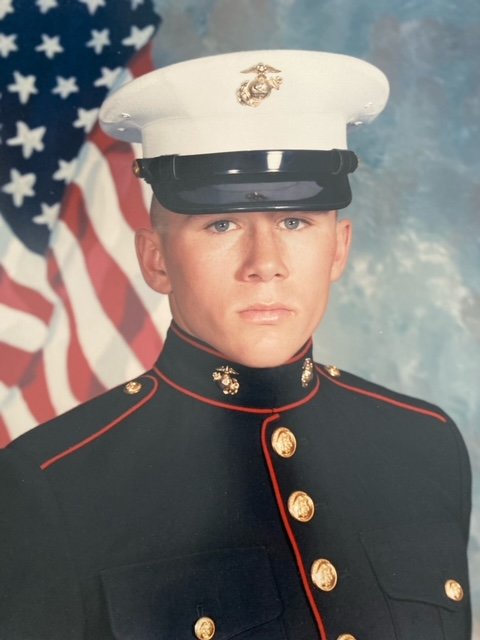 Please share a memory of Paul to include in a keepsake book for family and friends.
View Tribute Book

On July 4, 2021, we lost a husband, father, friend and patriot.  Paul Christopher McDevitt was born on June 1, 1970 in Lincoln Park, New Jersey to Donalyn Stagliano and Thomas McDevitt.  Paul grew up alongside his younger brother Scott McDevitt, and the two were not just brothers but the closest of friends.   Growing up in the McDevitt household came with some simple rules – set a high bar for yourself but always lend a hand.  Work hard.  Be loyal and honest.  The man Paul became started early.

In 1999, Paul met Julia Osnato (at a bar, of course, in Hoboken, NJ), where he pried himself away from his rugby crew long enough to catch her eye.   Their first date was Valentine’s Day (although the flowers could have been better!).  What happens when a headstrong and fiercely loyal young Marine meets a passionate, fiercely loyal young woman?  Love.  Those who watched them in the early days knew where this was headed – marriage – even before they did.  And what came next was a love forged like steel, growing stronger as they weathered the stumbles and obstacles life offered up.   Their love story is written in the pictures and memories of them together, always laughing.  Connected and content even in silence.  Their love story is in the walls of the home they built together.  And it’s written in the faces of their sons, Thomas Michael (15), Padraig James (13) and Daniel Scott (11).

Every child should be so blessed as to have a father like Paul.  He listened to his boys as if they were men.  But in the next moment, he was “Daddy Good Time,” ready to say yes to anything.   Bedtimes were optional and dessert didn’t need to wait.  Rugby, soccer, basketball, baseball and a million other things in between – and of course Paul was the coach of all of the boys’ teams, sharing the gift of his leadership and precious time without a second thought.  Even if you didn’t know Paul, to watch him with his boys, you knew that he was born to be a father.  Paul gave his boys the very best of himself every day he was with us.  And while the road ahead will be hard, Paul was with us long enough to show his sons how to be good men.

Paul  understood the price of freedom and believed some had to answer the call for the many.   He enlisted in the United States Marine Corps and served in the first Gulf War where, through his leadership and judgment, he was swiftly promoted to Sergeant. Paul embodied the code of the Corps – loyalty, honor, sacrifice – and leaves behind a brotherhood of Marines who love him truly as a brother.   Not everyone knew that Paul was a battle-tested Marine.  He did not boast of his service.  But if you watched him – professionally, with his family, in the community – you knew.   He was a true Marine, carrying the best of the Corps with him even after he left the uniform behind.

Paul was the Director of Buildings and Grounds for the Millburn Township Public Schools.  He was, without question, the model public servant.  His professionalism, reliability and work ethic provided so much for the community, all of it offered without any expectation of recognition or credit.

And then there was rugby, Paul’s passion (although Paul’s near-professional levels of cornhole excellence are a close second).  Whether as a member of the Marine Corps Old Breed Rugby Club or trustee and coach of the Morris Rugby club, whether playing or coaching, Paul loved rugby and the friends and relationships it gave him.

On a hot summer day just like this, you could find Paul poolside, enjoying a meal prepared by Aunt Laura, sharing a beer and a rum and coke with Pop Pop  and occasionally doing cannonballs with the boys and any of their friends who happened by for a swim.

A life like Paul’s can never be reduced to a page.  So we’ll end with two simple rules when it came to Paul:   No. 1.  Buy more beer and wine than you think you need.  No. 2.  Never say no to someone in need.  And now there’s a third one:   Honor your family and your country the way I did mine. No excuses.

Paul was pre-deceased by his mother Donalyn and is survived by his father Thomas, his brother Scott, his wife Julia, his sons Thomas, Padraig, Daniel, and his nieces and nephews Isabella, Angeline, Delia, Liam and Paul Riley.

In lieu of flowers, the family asks that donations be sent to The Old Breed Rugby Club in Paul’s name for a college scholarship fund for his sons. Checks can be mailed to: Old Breed Rugby Club, Attention Alex Carlson, 11037 Post Oak Road, Spotsylvania Courthouse, VA 22551

Share Your Memory of
Paul
Upload Your Memory View All Memories
Be the first to upload a memory!
Share A Memory